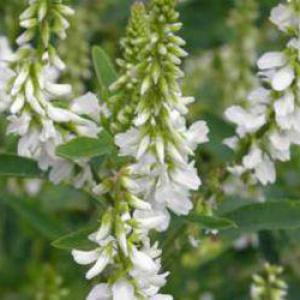 It is an annual or biennial plant with straight stems. In Latin it is called Melilotus albus Desr. The underside of the stems may have a reddish tint. The plant has trifoliate leaves. The middle leaf has a petiole. The inflorescence is represented by a brush. The corolla of the flower is white, and the reticulate and bare pod is distinguished by a sharp and short nose. White sweet clover has become widespread in Central Asia, Siberia, the Caucasus, in the European part of Russia and in the Crimea. It grows up to the tundra zone. Melilot prefers sandy light, calcareous, chernozem, mountain forest, mountain, meadow soils, as well as salt marshes. It can be seen on the outskirts of the roads. It often litters other plantings. It is a plant that tolerates high soil salt content, prolonged drought and flooding very well. By its yield, sweet clover surpasses many other crops.

It is indispensable for the development of salt licks and crust. Flowering and fruiting occurs from June to September. 100 kg of raw material during the flowering period contains 3 kg of protein. The hay harvested in this phase contains 1 kg of protein.

White melilot contains a huge amount of mineral components. It is commonly used in pastures. Sweet clover is poorly eaten by animals in the first days of grazing, as it contains a lot of coumarin. Before bud formation, the cattle eat the plant well. Later, only leaves are eaten. When mixed with cereals, sweet clover gives good nutritious silage. The yield of dry grass can be 6 tons per hectare. It is sown neat with tinning in early spring. The plant is sown without a cover and under cover in different ways: through a row, wide-row or ordinary. White melilot seeds remain viable for 10 years. The plant is considered a good honey plant and is used as a green fertilizer.