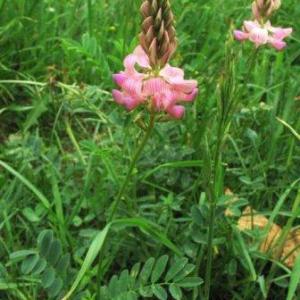 Sainfoin for beekeeping is interesting in sowing seeds, sown in different meadow communities, sown to consolidate sands and slopes, sowing sainfoin in near-patch plots, as well as planting for cattle fodder, which are mown at the end of flowering.

Sainfoin flowers are capable of releasing nectar even in windy, cloudy and rainy weather. A valuable property of sainfoin for bees is the release of nectar in dry years. &Nbsp;

Sainfoin is a honey plant and a pollen, but sainfoin is also a fodder, green manure and soil-improving, medicinal crop that can play a role in the biologization of agriculture.

Sainfoin can be used on green mass, on grass flour and haylage, which are eaten by all types of animals. Sainfoin is not inferior to alfalfa and clover in terms of feed value. When fed, sainfoin does not cause tympanitis in animals, which allows it to be fed in any weather and with dew. Sainfoin can be used for superficial and radical improvement of meadows.

When growing sainfoin, in the second year of life, 5 tons of organic matter remain in the soil on one hectare. The roots of sainfoin carry a large amount of phosphorus and calcium from the lower soil layers to the upper layers, which is favorable for the subsequent sowing of grain and other crops. Therefore, sainfoin is recommended for cultivation in the Non-Chernozem zone as a fodder and soil-improving plant.

There is an opinion that it is necessary to create areas of sainfoin in agrocenoses, followed by harvesting for seeds. In such crops, entomophages actively reproduce, which destroy many pests, such as pea or alfalfa aphids and many others. This contributes to the biologization of agriculture in general. Many wild pollinators nest in sainfoin crops. There is an opinion that the presence of a large number of pollinators on sainfoin crops removes a large amount of nectar and pollen and inhibits various pests. This is due to the fact that the nutrition of insect pests is significantly limited by carbohydrate feed. As a result, the yield of sainfoin increases and the number of pests decreases.