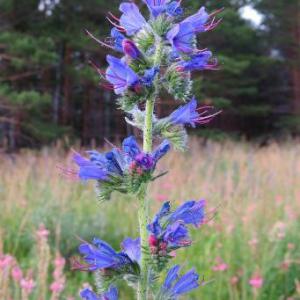 Echium vulgare, a honey-bearing biennial herb from the borage family (Boraginaceae), a herb 30-90 cm high. The stem is erect, up to 90 cm high. The whole plant is covered with hairs. Leaves are lanceolate, 5-10 cm long. Leaves are sessile, linear-lanceolate. The flowers of the echium are beautiful, small, funnel-shaped, bright blue (pink buds), collected in curls, and then in paniculate inflorescences. Fruits — brownish nuts. The echium grows everywhere in the steppe and forest-steppe regions of Europe, occupying the slopes of hills and abandoned arable lands, meadows. It grows in Kazakhstan and Siberia.

The flowers of the echium are large at the beginning of flowering pink, later bright blue in thick curls, collected in panicles. Echium flower for bees consistently releases nectar, even in a very dry summer, the nectar release of echium flowers does not stop in a rainy summer, as well as during summer cold snaps. Only autumn frosts can stop echium nectar. Echium vulgare flowers produce pollen well. Bees are good at collecting blue-violet pollen from echium. The importance of echium for beekeeping is often determined not only by its high honey productivity, but also by the fact that in many regions it blooms after the end of flowering orchards, when the tipping-free period begins.

As a honey plant, a echium for several years (5-8 years) can bear honey in one place. As a honey plant, echium can be included in many crop rotations. Thus, the beekeeper can create a good honey base for the apiary with minimal costs.

Honey from a echium can be left to bees as winter food, as it practically does not crystallize in the combs.